Queerology to Go on Hiatus

I shared the following letter with my Patreon supporters last night and wanted to share it with you too:

Two weeks ago, I pushed “send” on the first set of emails of the 2019 Queerology funding campaign with high hopes. After the success of last year’s financing push, I had spent the past year working (via a trade) with a financial advisor to gain better control over my finances, and learn how to steward financial gifts well.

As we worked together, it became apparent quickly that I only had raised about 30-40% of the money I needed to survive in Seattle, living frugally, on a tight budget. So, I threw myself into my three other jobs: being a restaurant server, an assistant instructor at a small graduate school, and my new psychotherapy practice. Those jobs, combined with my Patreon support, the small amount of money I received from signing my book deal, a few freelance design gigs, the occasional paid speaking gig, and my credit card, have held me together for the last year.

All the while, mostly maintaining my posting schedule of an episode a week. And writing a book.

My advisor and I had come to the conclusion that something had to shift and shift quickly before the end of this year. In June, I had to give up my restaurant job because of my travel schedule and my exhaustion. Which added to the financial stress.

In my mind, the most natural solution was to ask you — my community — to afford me the ability to continue the work of Queerology in a way that was actually sustainable. So, I spent two months carefully consulting with a fundraising coach (who offered to help pro-bono) and considering how I could rework my Patreon to get me up to the level I need. We worked on what I could give and how I could show my deep appreciation for those who allow me to do this work. We talked about ways to expand the reach of Queerology, and how we could work to create a community around the podcast.

Knowing I was at the end of my rope, I made promises, and sat with my exhaustion and my excitement, envisioning what it would be like if creating Queerology could foot my bills, the sense of freedom it could bring and the ways I could continue to build Queerology into something bigger than just me.

As I pushed that button two weeks ago, I was nervous but so excited to see how things would go.

Out flooded the emails.

One pledge came in.

Then, two people canceled their pledges. And nothing else happened.

My stomach began to sink.

The next day, the pitch went out on the show. A couple more pledges trickled in: pledges I felt so grateful for. But, other people continued to pull their pledges out. The number of people pledging was going up, but I was losing money.

I sat on my couch that night staring out my window, hungry because I didn’t have money for groceries, discouraged, confused, hurt, and scared. I was telling myself “this makes sense, it’s at the front of people’s minds again, and of course, some people are going to reconsider their pledges!” But, that only helped cognitively.

My shame voices were loud and unkind, and I wrestled with thoughts about myself, my worth, and my place in this world.

I realized something over these past two weeks: my entire identity has become wrapped up in Queerology.

I’ve been striving, aching, working towards a better world. But, in turn, I’ve lost much of my world. Sure, on the surface it looks great: accolades and book deals and travel. Underneath, however, is a different story. The pull towards celebrity culture is immense, but I’m not here to be a celebrity.

I have been forced to stare myself in the face and ask: Matthias, where does your worth lie? And look around look at the predicament I’m in and say: “this is not good.”

The other day, my clinical supervisor paused me and said something like, “the exhaustion you’re holding in your bones right now feels ancient. When are you going to stop working so hard?” and that felt like a gut punch. I’ve been creating Queerology almost non-stop for the last two-and-a-half years.

And it’s time to take a very, very, needed break.

A break to regroup. To reimagine. To pour the energy I do have into my upcoming book launch. To enjoy the fruits of that labor. To spend time with my friends. To do good work on behalf of my clients. And take my puppy on more walks.

Thus, it feels both deeply heavy and incredibly freeing to say these words: I’m putting Queerology on hiatus.

This is not the end of Queerology. I’m hoping to bring it back next spring. But it is the end for now. I’m excited to imagine how to continue this important work in a way that is sustainable. Not only financially, but physically, and emotionally. You believe in it. And I do too.

Practically, I have a few Queerology Live episodes scheduled that will still happen, and still be released (one coming mid-November, and one in January!) I’ll also share some book-related stuff in December, and I can’t wait to send out the stickers and enamel pins I promised during this drive. But, besides that, the weekly podcasts are over for the time being. Including my new venture, that was an overpromise, Things I’m Thinking About.

Friends, I’ve asked for a lot over the last few months, and I have one more ask: will you continue to support me? I have not wavered from my commitment to this work. This is a break from the podcast, but your money still goes directly to the work Queerology embodies. In these next few months, it’ll take the form of the live-episodes, the launch of my book (which, I’ve been told by my author friends, is a full-time job in itself), in the support role I play to many people who reach out to me (emails, calls, dms), and in preparing for a reimagination and re-launch of Queerology.

I don’t want to burn out. This work must continue, and I know this is the right choice to help me continue. Queerology will return. I’m still here. The book is coming.

With love and gratitude, 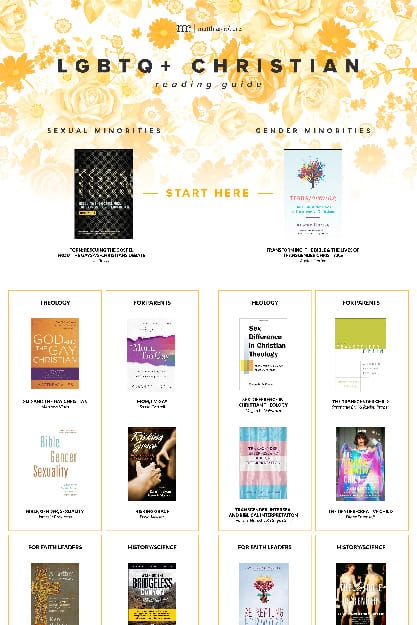 Get My LGBTQ+ Reading Guide!


Want to learn more but don't know where to start? This guide makes it easy.

Next PostVivian Gietz is a Bisexual Catholic

Get My LGBTQ+ Christian Reading Guide!

I Want the Reading Guide!